Captain Jeff was 3 years old when he was given his first rod and reel as a gift from his parents. It was at that young age his passion for fishing began to develop. He grew up fishing the Chesapeake Bay, as well as the inshore bays and offshore canyons of Ocean City Maryland. At the age of 5 he was featured in the Coastal Fisherman newspaper for a massive flounder he reeled in. He progressed to enjoy the offshore fishery catching White Marlin, Blue Marlin, Tuna, Wahoo, Dolphinfish (aka-Mahi Mahi or Dorado), and various other pelagic species as he grew older. Fishing and being on the water has always been a way of life for Captain Jeff. Whether that was hiking through the woods after school to a remote pond holding brim and bass, or chasing big pelagic species with his family and friends offshore. The pursuit of bending a rod and coming tight on fish is a thrill that never got old. When Jeff was away from the saltwater he would frequently fish the Delaware River in a Jet boat, wade-fish various rivers and streams in New Jersey for trout, and travel to Toronto, Canada each year with his family to fish for Smallmouth, Walleye and Northern Pike. Through his college years in Rhode Island he learned about the New England fishery and tactics for Stripers (aka Rockfish), Fluke, Sea Bass and other species. Working at a local marina was a great learning experience and gave him the opportunity to meet people and learn more about the area. Weighing in Giant Bluefin Tuna, Stripers, Tautog, Scup, Lobster, and various other species when he was not studying. In 2012 he moved to Jacksonville Florida where he spent a lot of time fishing inshore and offshore. He quickly met great friends and amazing fisherman in the area and would bottom fish for Grouper, Snapper, Triggerfish; or troll for Wahoo, Tuna, Mahi, and Kingfish. The inshore Redfish, Trout and Flounder bite in “Jax” was also a lot of fun.

Jeff earned is his captains license in 2017 and began running some inshore charters while juggling a corporate career. He also fished the Indian River Lagoon often over the past 10 years honing in a large gator Trout, and Snook inshore. In addition to catching fish; Captain Jeff believes fishing itself is a very spiritual way for everyone to connect with nature and be in tune with the beauty and greatness of the environment. It’s also a chance to share in a laugh, tell some good stories, be in the moment and temporarily forget some of the stresses that life brings to us all. 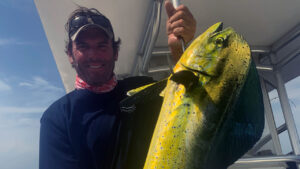